An online price tracking website monitoring the price increases and decreases across seven major UK supermarkets can reveal that, for the third month in a row, ASDA retains its title as the least expensive option for British consumers for the month of July.

The results have been determined by tracking how each retailer prices the 43 items outlined in the Government’s Consumer Price Index ‘shopping basket’.

During the first three weeks of the month of July, the average total of the shopping basket was cheapest at ASDA, with Iceland taking the top spot in week four. Ocado was the most expensive store overall with an average basket cost of £151.95 and Tesco came in at £7.16 more expensive than Waitrose every week with an average basket cost of £145.71 compared to Waitrose average weekly total of £138.55.

Not all 43 items were consecutively tracked over the four-week period as products such as ketchup and pasta were sold out across various supermarkets due to the effects of COVID-19.

When looking for the biggest price variation of an individual product, Morrisons Leg of Lamb saw the biggest price drop from week one to week two, dropping from £23.63 to just £18, before rising back up to £23.63 in week three and back down to £18 in week four. The lamb is currently priced at £23.63 so Alertr’s Retail Analysts can safely predict that it will be back down to £18 by next week and every fortnight thereafter.

Andy Barr, co-founder of www.alertr.co.uk, said:
“It is pretty amazing to see Asda coming out the cheapest once again, despite the fact the COVID-19 pandemic meant that some products were not being tracked across the full four-week period. Whilst we know that not all of these products would necessarily be bought on a weekly basis, it still gives a good idea of where price drops are made across certain stores. Despite Waitrose being known as a higher end brand and having more expensive produce compared to the rest of its supermarket competitors, it is really interesting to see it come in so high at fourth overall for its products out the seven supermarkets tracked.”

Online price tracking website Alertr (www.alertr.co.uk) has been tracking the prices of 43 everyday items from the shopping basket on the Office for National Statistics’ Consumer Price Index (CPI) since 2019. Included within the list are items such as eggs, milk and bread, as well as non-perishables pasta, rice and cereal. The prices across seven of the largest supermarkets are analysed, with discount retailers like Lidl and Aldi not included due to the inability for customers to shop full ranges online.

Own-brand items (or their equivalent) were monitored in the research to give the most unbiased comparison of goods and their prices, with the exception of brands that all seven supermarkets stocked (e.g. Coca-Cola). The full breakdown of supermarkets average basket costs from lowest to highest over the four-week period in July, are as follows:

When looking into the separate costs of individuals products, in week four, Morrisons Kenco Millicano coffee 100g was £3 compared to Asda’s which was £6.99 and Sainsburys was £7.00. Asda came out as one of the cheapest alongside Iceland for Hartley’s strawberry seedless jam compared to Waitrose who priced the product at £1.78. Tesco topped the list for the most expensive ice cream (2 Litre tub of Cornish Ice Cream) at £3.00, with Asda and Iceland listing theirs at just £1.50 – half the price. 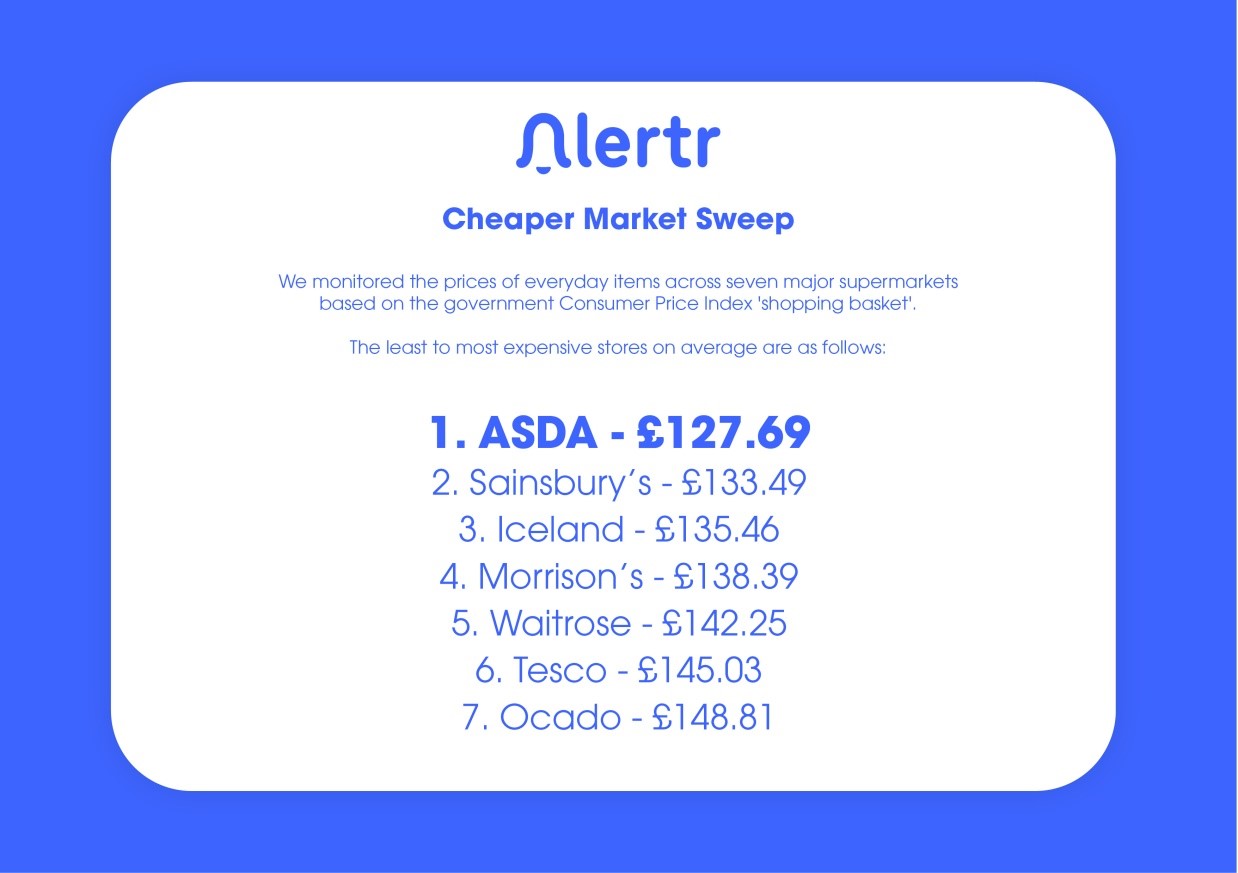 A price-tracking website in the UK has been monitoring the cost of various like-for-like items in the government-based Consumer Price Index ‘shopping basket’ from seven of the main supermarkets, in order to determine which offers the cheapest prices overall for everyday necessities and items.

The prices for a total of 43 items from the shopping basket on the Office for National Statistics’ Consumer Price Index (CPI) were tracked over a six-week period, including: home-brand loaf of white bread, cereals, rice, chicken, beef mince, eggs, cheese, milk, potatoes, fruit juice, sugar, wine and beer.

www.Alertr.co.uk used its price-tracking technology in order to monitor any change in pricing for the 43 items over the course of the six weeks; focusing on Morrison’s, Asda, Tesco, Sainsbury’s, Ocado, Waitrose and Iceland. Other supermarkets, such as Aldi and Lidl, were not included in the research due to the inability to shop the full range of items online from those stores.

Own-brand items (or equivalent) were used in the research to give the most unbiased comparison of goods and their prices, unless it was a brand that all seven supermarkets stocked (e.g. Coca-Cola).

ASDA was consistently the cheapest supermarket from which to buy the 43 CPI shopping basket items, apart from one week where Sainsbury’s was cheaper, with ASDA coming in at £127.70 on average. The stores from highest to lowest expense for the items were:

The Alertr research also found that Morrisons was the cheapest supermarket to purchase a bottle of red wine (Campo Viejo Rioja Tempranillo), costing just £6.50 compared to Ocado’s £8.00 (the priciest). It was also one of the cheapest place for a pack of 4 Alaskan Salmon Fillets, coming in at £3.30, compared to £4.04 at Ocado and £4.50 at Iceland.

Andy Barr, co-founder of www.Alertr.co.uk, said;
"When we started monitoring the items that we’d selected from the government CPI shopping basket, we didn’t expect ASDA to be the cheapest for five out of six weeks running, or even for Sainsbury’s to come in as the second cheapest supermarket, especially when you consider brands such as Iceland, that are more known for their ‘budget’ price tags, were also included. Perhaps shoppers need to set aside their preconceptions of supermarkets now, because they may well be missing out on bargains by going to stores that they assume would be cheapest!"

Alertr was founded in 2019 and is an online price tracking website where consumers can track as many products as they wish across as many online retailers as they like.

Users of Alertr simply need to input the URL of the product they have their eye on from a retailer’s website, and then they will be notified via email once the price has dropped, either to a cost they have stated they are happy to pay, or by any amount.

Alertr is able to track more than 250 high-street and online retailers, with new stores and websites added to the site daily. With plans to expand its offering significantly throughout the coming months, the team at Alertr are determined to help UK consumers ensure they are spending as little as possible when it comes to the items they need and want.